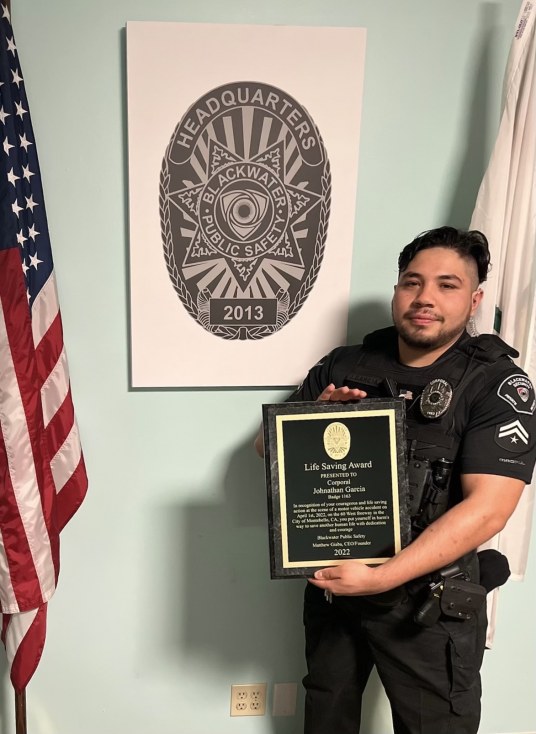 MONTEBELLO, Calif. - BostonChron -- A Corporal with Blackwater Public Safety, Jonathan Garcia, is being hailed a hero after saving a family from their burning car following a serious accident. While driving his patrol vehicle on 60 West Freeway in the city of Montebello, California on the evening of Friday April 1st 2022, Garcia witnessed a serious accident right in front of him.  He immediately stopped at the scene of the crash, to see if he could render assistance.

Corporal Garcia identified several injured parties and immediately contacted emergency services.  At least 3 passengers (2 of which were children under 12) were able to exit one of the vehicles, despite their injuries.  The driver of that vehicle appeared to be more severely injured and was unable to exit the vehicle on his own.

Police arrived and while they were securing the scene, assessing injuries and waiting for paramedics, the vehicle, with the driver still inside, burst into flames.

More on Boston Chron
Without a second thought to his own safety, Blackwater's advanced dashcam footage shows Garcia quickly responding by forcing the driver-side door open and carrying the injured driver to safety.

Thanks to Corporal Garcia's quick thinking and bravery, he was able to prevent a tragedy from occurring. "I'm just glad that I was able to help them," said Garcia."

Matthew Giaba, CEO of Blackwater Public Safety issued Garcia with the Life Saving Award saying "We are proud to have Corporal Garcia on our team.  Without hesitation, he courageously went above and beyond to save another human life."