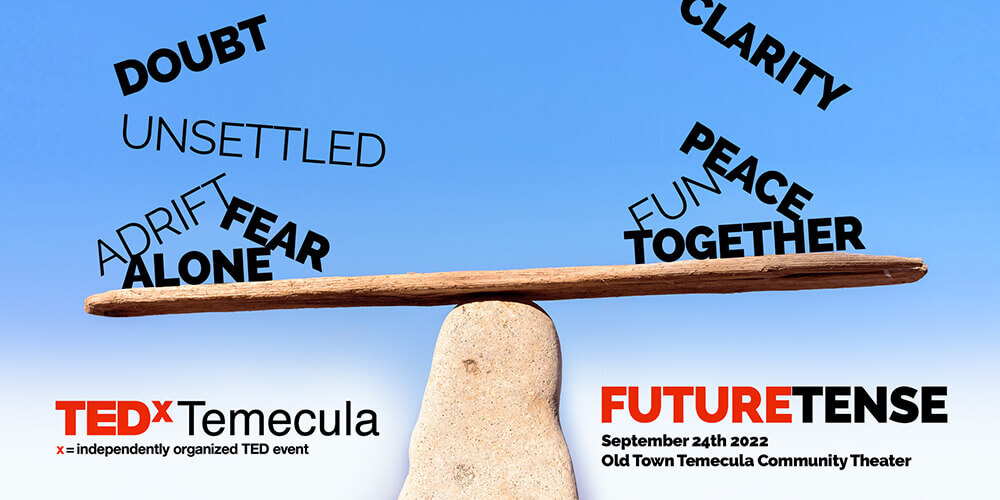 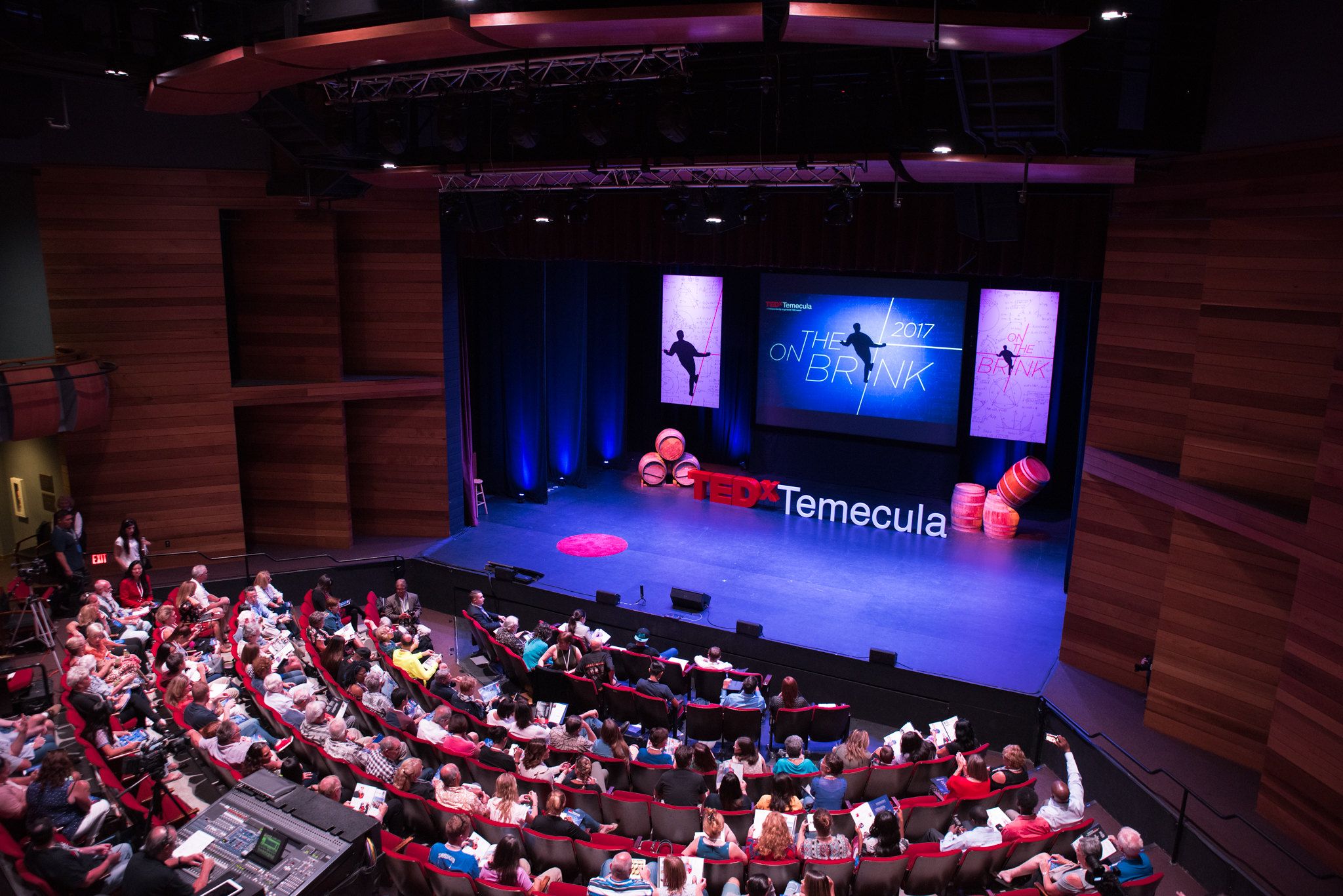 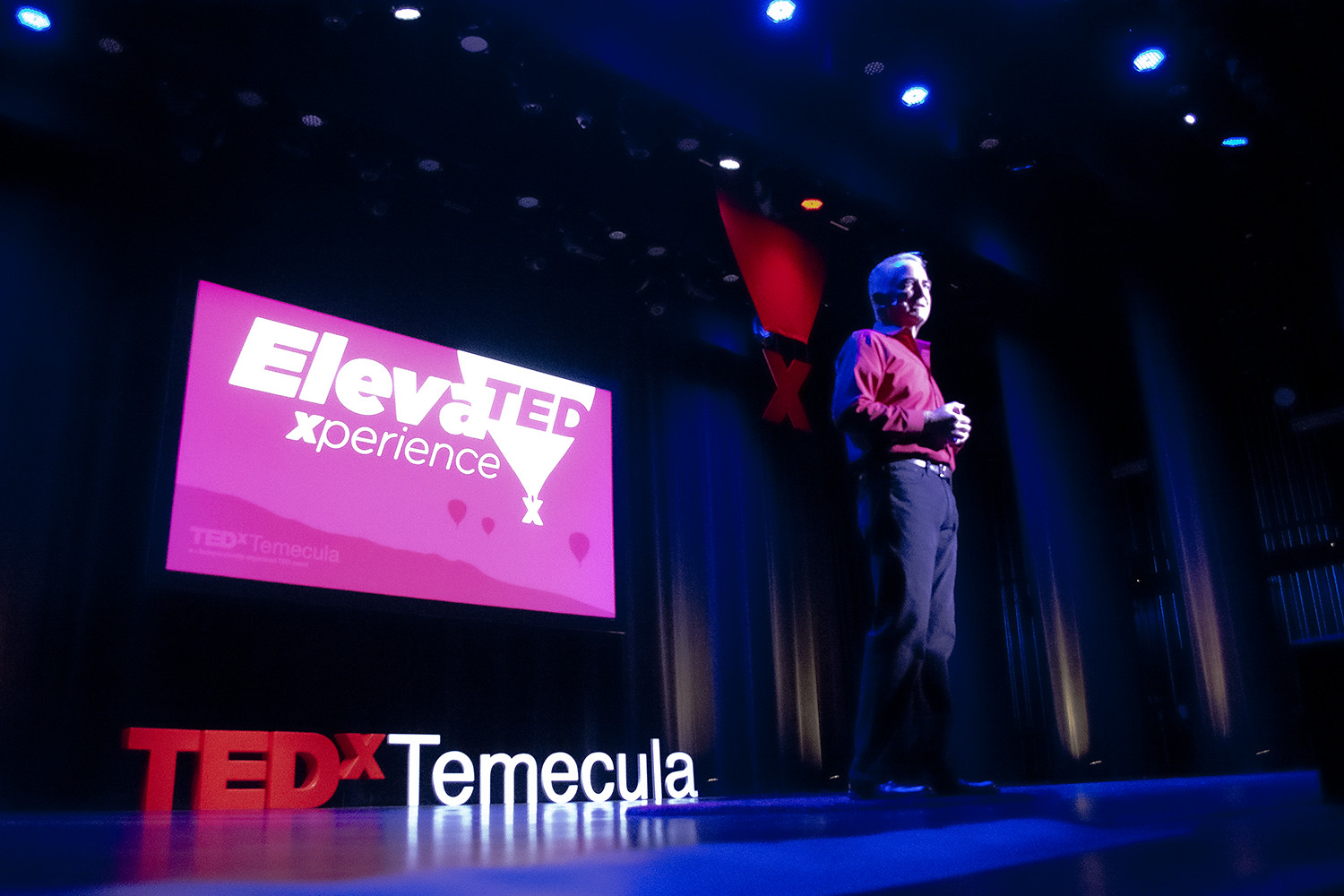 TEDxTemecula will launch its second decade – bringing together the Temecula Valley's brightest thinkers, visionaries and performers – with its 11th annual conference on Saturday, Sept. 24, at the Old Town Temecula Community Theater.

To date, more than 80 speakers have taken the TEDxTemecula stage, presenting fresh ideas on technology, health, the arts and entertainment, and more. Their talks have a combined 2.8 million views on YouTube and the tedxtemecula.com website.

While this year's theme is "FutureTense," several speakers have direct connections to significant past events: Scott Greenberg's grandmother was one of 1,200 Jews saved during the Holocaust through the efforts of German industrialist Oskar Schindler; Waleed Soro grew up in Saddam Hussein's Iraq before immigrating to the U.S. as a teenager; and both Jennifer Cassetta and Meagan Hopper were in New York City or nearby and experienced the 9/11 terrorist attacks.

In addition to a day of inspirational and educational talks that will celebrate curiosity and offer hope for a better future, guests will enjoy live music and dance performances, savor a locally sourced lunch with dessert, sip vintages from the nearby Wine Country, and have opportunities to engage with neighbors, friends and others about all that you've discovered.

It's truly a unique event in the Temecula Valley.

Here are some additional details about each speaker:

Lola Adeyemo
The founder and CEO of EQI Mindset, a management consulting company focused on team and employee resource group optimization, Lola Adeyemo is a career mom of three children and a longtime advocate of diversity, equity and inclusion in the workplace at every level. Her new book, "Thriving in Intersectionality: Immigrants, Belonging and Corporate America," is available now as an e-book via Amazon, and hardbound/paperback copies will be available starting Oct. 4.

Beckett William Bayan
A student of the violin since the age of 4, Beckett William Bayan's musical talents shined as a second grader when he received national recognition for his composition about the endangered Palos Verdes Blue Butterfly. Now 12, Beckett made his Walt Disney Concert Hall solo debut this summer with the Filipino American Symphony Orchestra. Also, he can be found on YouTube, where he posts silly videos to his @practicenotperfect channel to encourage other kids to have fun while practicing and playing classical music.

Jennifer Cassetta
A success coach, self-defense expert and author ("The Art of Badassery"), Jennifer Cassetta offers training on how to take feelings of fear and anxiety and turn them into a self-empowerment tool. Jennifer has helped employee teams from Apple, Nike, Uber and other major companies, and countless others via appearances on NBC's "Today" and other national and local TV shows.

More on Boston Chron
Scott Greenberg
After a cancer diagnosis while attending film school, and a year of successfully battling the disease, Scott Greenberg built a career as a motivational speaker for business leaders and later purchased two Edible Arrangements franchises – leading his employees through a rollercoaster of ups and downs, including the 2007-08 global financial crisis, to business success and company-wide recognition.

Sarah Hoggan, DVM
An emergency veterinarian for 21 years, Sarah Hoggan says her primary mission is to translate a pet's medical diagnosis and clinical situation into a more understandable context for each family so they can make pet-care decisions feeling empowered instead of overwhelmed. Sarah's 2019 TEDxTemecula presentation, "The Emotional Costs of Euthanasia," has more than 230K views on YouTube.

Meagan Hopper
Since launching her alternative health and wellness business seven-plus years ago, Meagan Hopper has helped people near and far as a speaker at global summits, while also coaching clients one-on-one. She hosts "The Cacao Crowd" podcast, which is an exploration of healing, empowerment and how to love yourself a little more each day. Meagan also has a foot in corporate America, working as a construction project manager for one of the nation's largest entertainment companies.

Waleed Soro
Waleed Soro, who has a personality that can fill a room, has brought the flavors and cooking style of his native Iraq to American taste buds. In the States, his resume includes stints as head maître d' at Hotel St. Regis across the street from General Motors in Detroit, flambé captain at a restaurant in Sacramento and, since July 4, 2009, as owner of his own place, Soro's Mediterranean Grill, in Old Town Temecula. Waleed's book, "I've Never Had a Bad Day," is available from Amazon and other booksellers.

About TEDxTemecula
Since 2012, Jim McLaughlin, a local businessman and community advocate, has been leading a team of volunteers who stage annual conferences featuring speakers who deliver engaging and inspiring talks – all with fresh "ideas worth spreading." Topics have covered the arts, design, education, health, technology and many more. TEDx presentations, including TEDxTemecula, are independent events operated under a license from TED.

About TED
TED is a nonprofit organization devoted to Ideas Worth Spreading, often in the form of short talks delivered by leading thinkers and doers. Many of these talks are given at TED conferences, intimate TED Salons and thousands of independently organized TEDx events around the world. Videos of these talks are made available, free, on TED.com and other platforms. Audio versions of TED Talks are published to TED Talks Daily, available on all podcast platforms.

TED's open and free initiatives for spreading ideas include TED.com, where new TED Talk videos are posted daily; TEDx, which licenses thousands of individuals and groups to host local, self-organized TED-style events around the world; the TED Fellows program, which selects innovators from around the globe to amplify the impact of their remarkable projects and activities; The Audacious Project, which surfaces and funds critical ideas that have the potential to impact millions of lives; TED Translators, which crowdsources the subtitling of TED Talks so that big ideas can spread across languages and borders; and the educational initiative TED-Ed. TED also offers TED@Work, a program that reimagines TED Talks for workplace learning. TED also has a growing library of original podcasts, including The TED Interview with Chris Anderson, WorkLife with Adam Grant, Far Flung with Saleem Reshamwala and How to Be a Better Human.