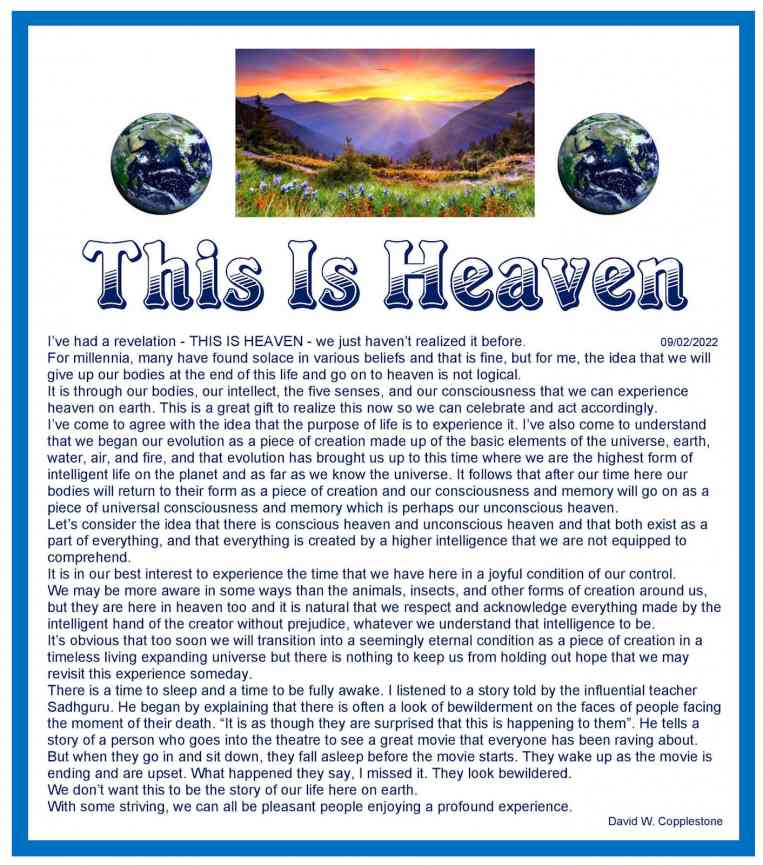 OSTERVILLE, Mass. - BostonChron -- This Is Heaven

I've had a revelation - THIS IS HEAVEN - we just haven't realized it before.

For millennia, many have found solace in various beliefs and that is fine, but for me, the idea that we will give up our bodies at the end of this life and go on to heaven is not logical.

It is through our bodies, our intellect, the five senses, and our consciousness that we can experience heaven on earth. This is a great gift to realize this now so we can celebrate and act accordingly.

I've come to agree with the idea that the purpose of life is to experience it. I've also come to understand that we began our evolution as a piece of creation made up of the basic elements of the universe, earth, water, air, and fire, and that evolution has brought us up to this time where we are the highest form of intelligent life on the planet and as far as we know the universe. It follows that after our time here our bodies will return to their form as a piece of creation and our consciousness and memory will go on as a piece of universal consciousness and memory which is perhaps our unconscious heaven.

It is in our best interest to experience the time that we have here in a joyful condition of our control.

We may be more aware in some ways than the animals, insects, and other forms of creation around us, but they are here in heaven too and it is natural that we respect and acknowledge everything made by the intelligent hand of the creator without prejudice, whatever we understand that intelligence to be.

It's obvious that too soon we will transition into a seemingly eternal condition as a piece of creation in a timeless living expanding universe but there is nothing to keep us from holding out hope that we may revisit this experience someday.

There is a time to sleep and a time to be fully awake. I listened to a story told by the influential teacher Sadhguru. He began by explaining that there is often a look of bewilderment on the faces of people facing the moment of their death. "It is as though they are surprised that this is happening to them". He tells a story of a person who goes into the theatre to see a great movie that everyone has been raving about. But when they go in and sit down, they fall asleep before the movie starts. They wake up as the movie is ending and are upset. What happened they say, I missed it. They look bewildered.

More on Boston Chron
We don't want this to be the story of our life here on earth.

With some striving, we can all be pleasant people enjoying a profound experience.